In the solar cell square array, the diode is a very common device. The commonly used diodes are basically silicon rectifier diodes. When selecting, leave a margin in the specifications to prevent breakdown damage. Generally, the reverse peak breakdown voltage and maximum operating current must be more than twice the maximum operating voltage and operating current. Diodes are mainly divided into two categories in solar photovoltaic power generation systems. 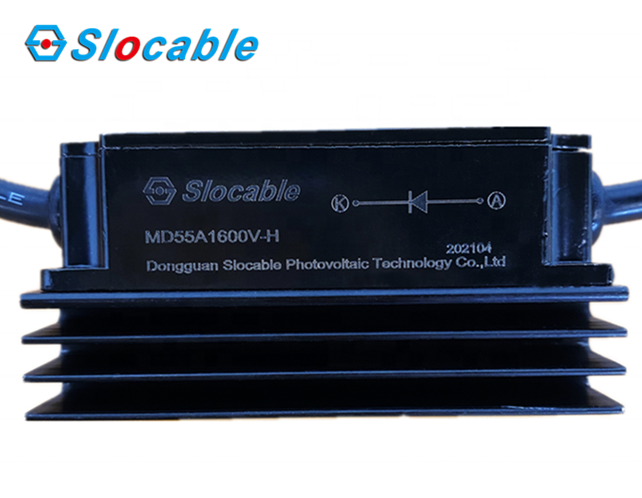 One of the functions of the anti-reverse diode is to prevent the current of the battery from the solar cell module or the square array from being reversed to the module or the square array when it is not generating electricity, which not only consumes energy, but also causes the module or the square array to heat up or even be damaged; The second function is to prevent the current flow between the branches of the square array in the battery array.This is because the output voltage of each branch in series can not be absolutely equal, there is always a difference between the high and low voltage of each branch, or the output voltage of a branch is reduced due to fault or shadow shading, and the current of the high voltage branch will flow to the low voltage branch, or even the output voltage of the total square array will be reduced. This phenomenon can be avoided by connecting anti reverse charging diodes in series in each branch.
In the independent photovoltaic power generation system, some photovoltaic controller circuits have been connected to anti-reverse charging diodes, that is, when the controller has the anti-reverse charging function, the component output does not need to be connected to the diode.
The anti-reverse diode has a forward voltage drop, and there will be a certain power consumption when connected in series in the circuit. The voltage drop of the silicon rectifier diode generally used is about 0.7V, and the high-power tube can reach 1~20.3V, but its withstand voltage and The power is small, suitable for low-power applications.

When there are more solar cell modules connected in series to form a square cell array or a branch of a square cell array, one (or 2~3) diodes need to be connected in reverse parallel at the positive and negative output terminals of each battery panel. The diodes connected in parallel at both ends of the component are called bypass diodes.
The function of the bypass diode is to prevent a certain component in the square array or a certain part of the component from being shaded or malfunctioning to stop power generation. A forward bias will be formed at both ends of the component bypass diode to make the diode conduct. The string working current bypasses the faulty component and flows through the diode, which does not affect the power generation of other normal components. At the same time, it also protects the bypassed component from being damaged by high forward bias or heating due to the “hot spot effect”.
Bypass diodes are generally installed directly in the junction box. According to the power of the components and the number of battery cell strings, 1 to 3 diodes are installed.
Bypass diodes are not required in any situation. When the components are used alone or in parallel, they do not need to be connected to the diode. For occasions where the number of components in series is small and the working environment is good,  it is also possible to consider not to use bypass diode.

Principle of the diode protection circuit

When a forward voltage bias is generated, the mutual suppression of the external electric field and the self-built electric field increases the diffusion current of the carriers and causes the forward current (that is, the cause of electric conduction).